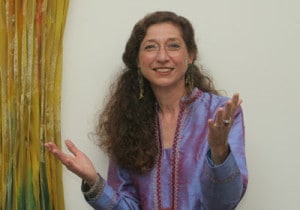 Born in Italy and grew up in Kansas City, Missouri, USA
Immigrated to Israel in 1972
Married Gerald Cromer in 1973
Mother of Maayan, Ariel, Elisha and Adam

Chana Cromer, a resident of Jerusalem, was born in Italy to parents who survived the Holocaust, was raised in Kansas City in the USA and immigrated to Israel in 1972. She received her BA in literature at Washington University in St. Louis and her MAT at Boston College. At Bezalel Academy of Art in Jerusalem, she received her BFA in 1982, studied printmaking at Pratt Institute, and textile printing at Philadelphia College of the Arts. Concurrent with her artwork, she does synagogue textiles, as well as having taught for many years as a teacher and lecturer in high schools and colleges. In the last ten years, both Melila Eshed – Hellner and Rabbi Daniel Epstein have been inspiring teachers for her art.